We’re often asked ‘when is the best time to go to Rwanda?’, and the answer is usually complex. It will depend on many things including your interests, where you want to visit and why you’re travelling. One person’s best time is another’s worst!

However, often a concern about the weather underlies the question of ‘the best time to go’. So here we’ve put together a very rough guide to the climate in Rwanda. Remember that this comes from records and our experience, not from a crystal ball, and that Africa’s weather patterns are becoming increasingly unpredictable – probably due to global warming.

In the heart of Africa, fractionally south of the equator, Rwanda’s relatively high altitude provides it with a remarkably pleasant tropical highland climate, albeit also with plenty of rain. Temperatures vary considerably between locations depending on their altitude, but very little from month to month in the same place. In the capital, Kigali, the average daily temperature is about 21°C.

Rwanda’s long rainy season lasts from about March to May, when the rain is heavy and persistent. Then from June to mid-September is the long dry season; this is generally the best time to visit if you have the choice. October to November is a shorter rainy season and it’s followed by a short dry season from December to February. During both of Rwanda’s dry seasons, there is often light cloud cover. This helps to moderate the temperatures, but also occasionally brings light rain showers.

As diversified as the different safari styles in Rwanda just so are the accommodation styles we offer:

Lodge safaris offers accommodation in lodges and permanent tented camps with solid flooring. Luxury safaris include specially selected four to five-star lodgings where you will have a bedroom, good beds with linen and an en-suite bathroom.

Our Mobile Explorer safaris offer camping in secluded and private campsites away from the crowds. The tents we use are larger than camping tents and guests sleep on single beds fitted with a proper mattress and linen. The food on our Mobile Explorer safaris is specially prepared by well- trained safari chefs and will be served in the mess tent or under the open African sky. Mobile toilets and bush showers are provided. The Mobile Explorer safari style is ideal for nature lovers who enjoys peace and quietness in the middle of the African bush but who prefer a little comfort.

Adventure Camping safaris are perfect for adventurers and are more rustic in style. You will overnight in public campsites within the national parks or on campsites outside the parks but close to the entrance. Guests sleep in 2-man tents on comfortable sleeping mats. Ablution facilities on camp sites are very basic and shared with other campers. A safari cook will prepare delicious home-cooked food, served in a lapa on the camp site. Adventure Camping safaris are great for nature lovers with a limited budget, families and the young-at-heart. 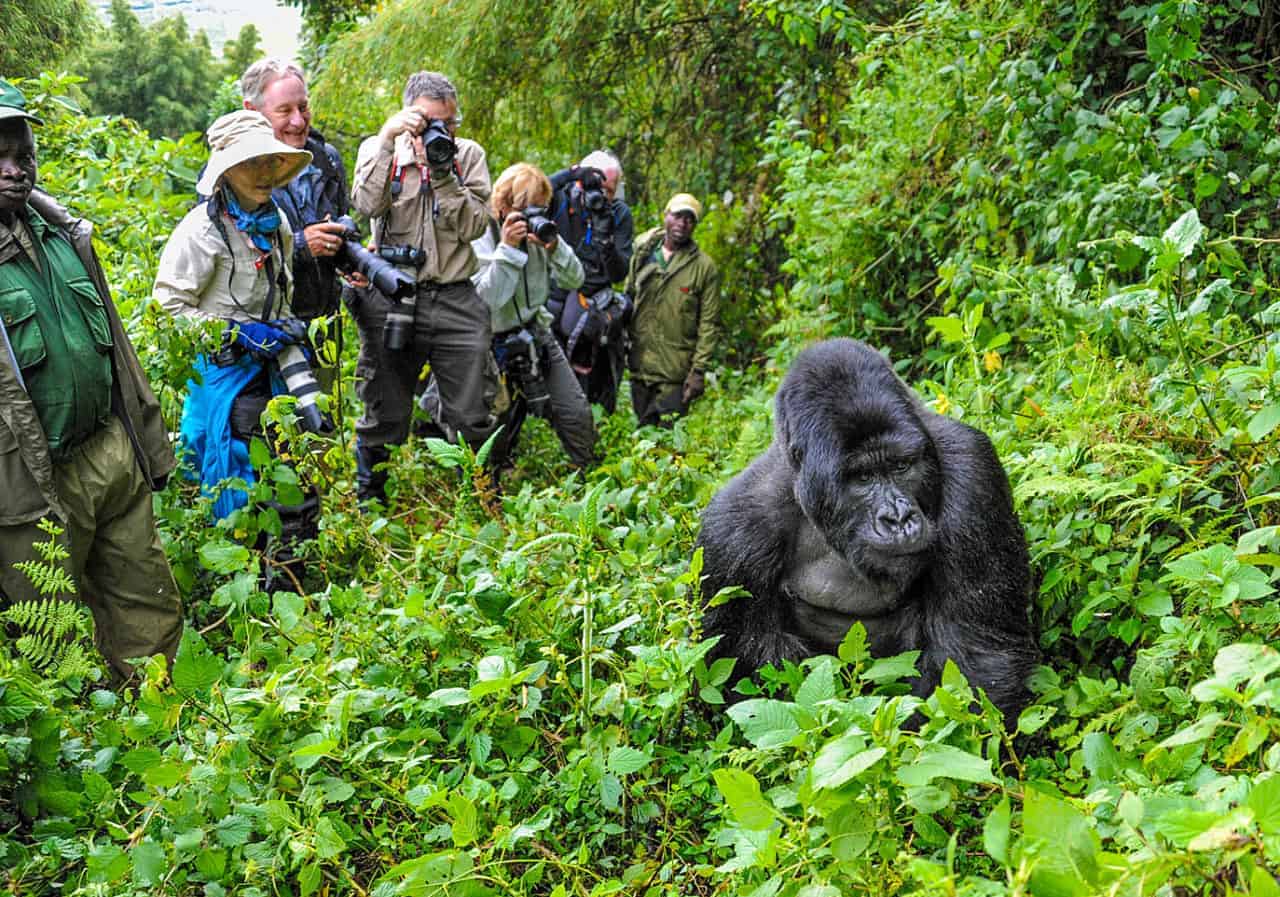 Tracking mountain gorillas in Rwanda is the ultimate wildlife experience and the reason why most people come here on holiday: sitting within a small family group of gorillas is a ‘must’ for serious wildlife enthusiasts. This is where Dian Fossey first brought the world’s attention to the plight of these majestic primates in the late 1960s, when only around 250 survived. Today their numbers worldwide have increased to some 880, split between Rwanda, Uganda and the Democratic Republic of Congo; almost half of them live in Rwanda’s Volcanoes National Park.

The survival of mountain gorillas is one of Africa’s greatest conservation success stories, and tourism has played its role in this. Rwanda is regarded as probably the best destination for a gorilla tracking safari. Although gorilla tracking permits aren’t cheap, your permitted hour with these great apes promises to be a priceless encounter that will remain with you long after your holiday is over.

Although mountain gorillas are the stars of the show, there are plenty of other primate tracking opportunities while on holiday in Rwanda. Nyungwe Forest National Parkis home to thirteen different primate species, among them chimpanzees and Rwenzori colobus, both of which can be tracked. Indeed, Nyungwe’s colobus monkeys can sometimes be seen in spectacular troops of several hundred, believed to be among the largest numbers worldwide. And in Volcanoes National Park, two groups of endangered golden monkeys have been habituated for visitor tracking. Pretty and playful, they’re a delight to watch.

Rwanda may not seem the obvious choice for a typical safari holiday, but if you’re travelling here anyway, Akagera National Park in the east of the country is worth exploring. Scenically it is one of Africa’s prettiest parks, with rolling hills and deep valleys, savannah plains to the north and lakes and papyrus swamps on its eastern border. It includes the largest protected wetlands in Central Africa and is home to some 8,000 animals and over 480 species of birds that include the rare shoebill, making Akagera an interesting destination for a bird watching holiday.